Home › About Us › Leadership › Manny Toro 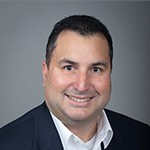 Manny Toro is Vice President of Sales and Estimating and is also an integral member of the leadership team of S. I. Goldman Company.  As a member of the Leadership Team, his responsibility is to provide detailed information regarding current market conditions and potential opportunities.  Manny, along with his team, are also responsible for obtaining the revenue goals for all of S.I. Goldman’s locations and markets.

In 1996, Manny joined the S.I. Goldman team as a Project Engineer and since has held various positions within the Company.  This experience gives him the knowledge to lead the Sales and Estimating team at the highest level.  Before joining S.I. Goldman Company, Manny attended the University of Central Florida where he graduated with a Bachelor of Science in Mechanical Engineering.  During his college years, he gained the love for the mechanical construction industry while working as a field helper for a large mechanical contractor.

Learn about our vison and values

Find out about safety